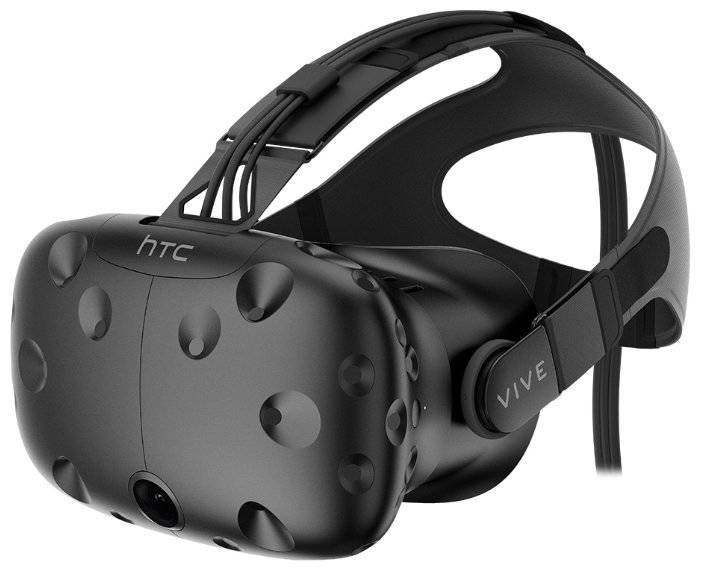 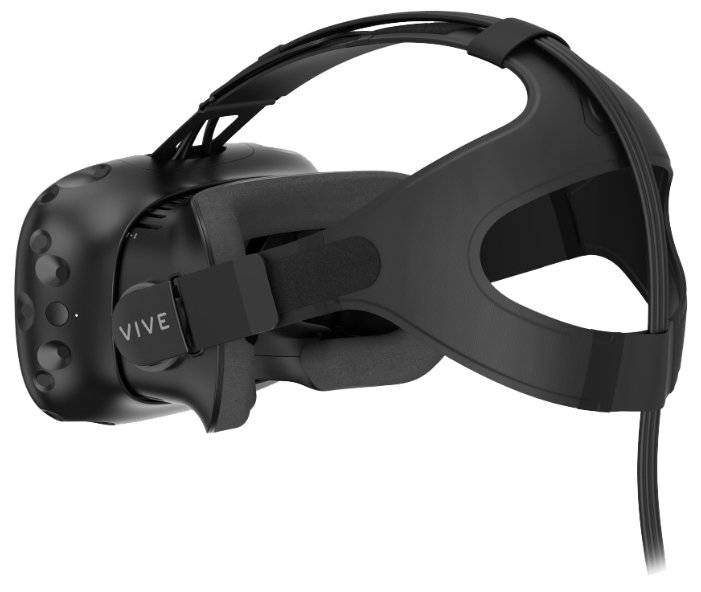 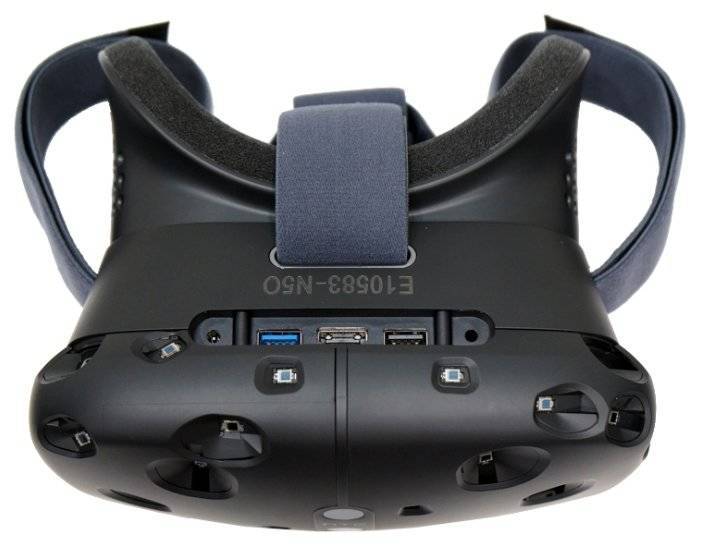 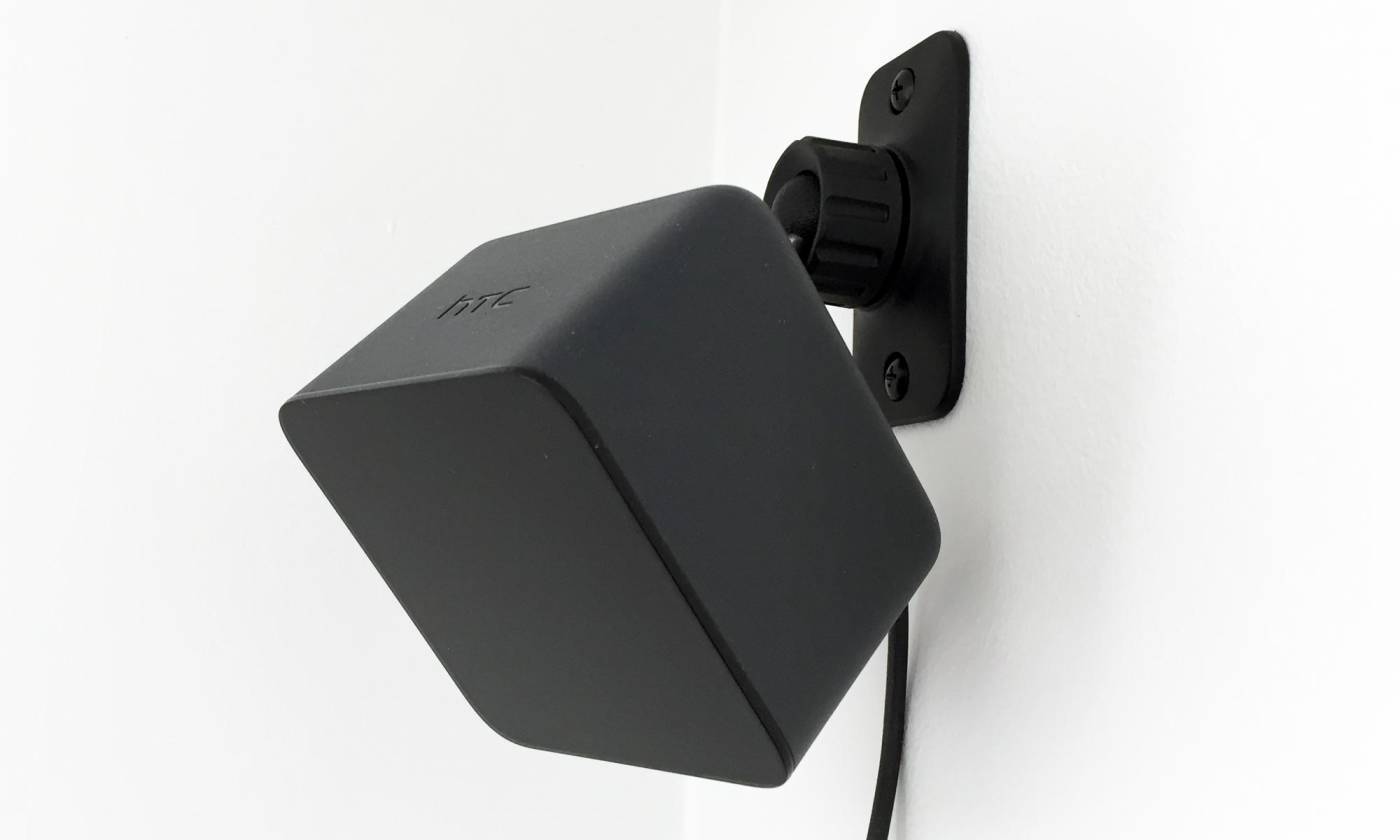 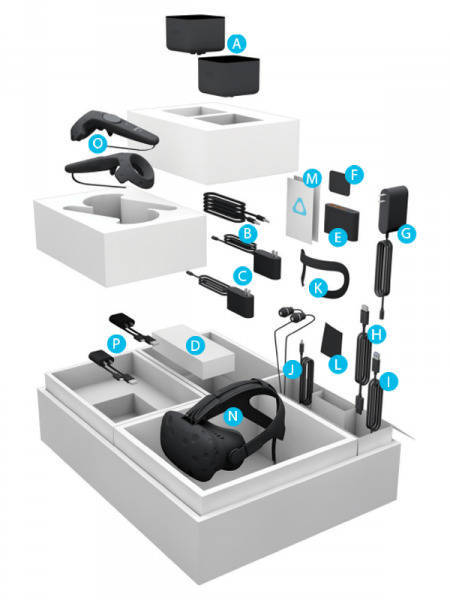 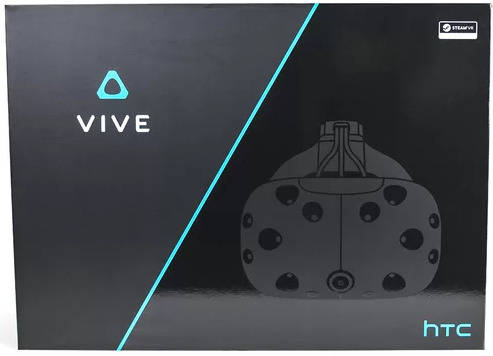 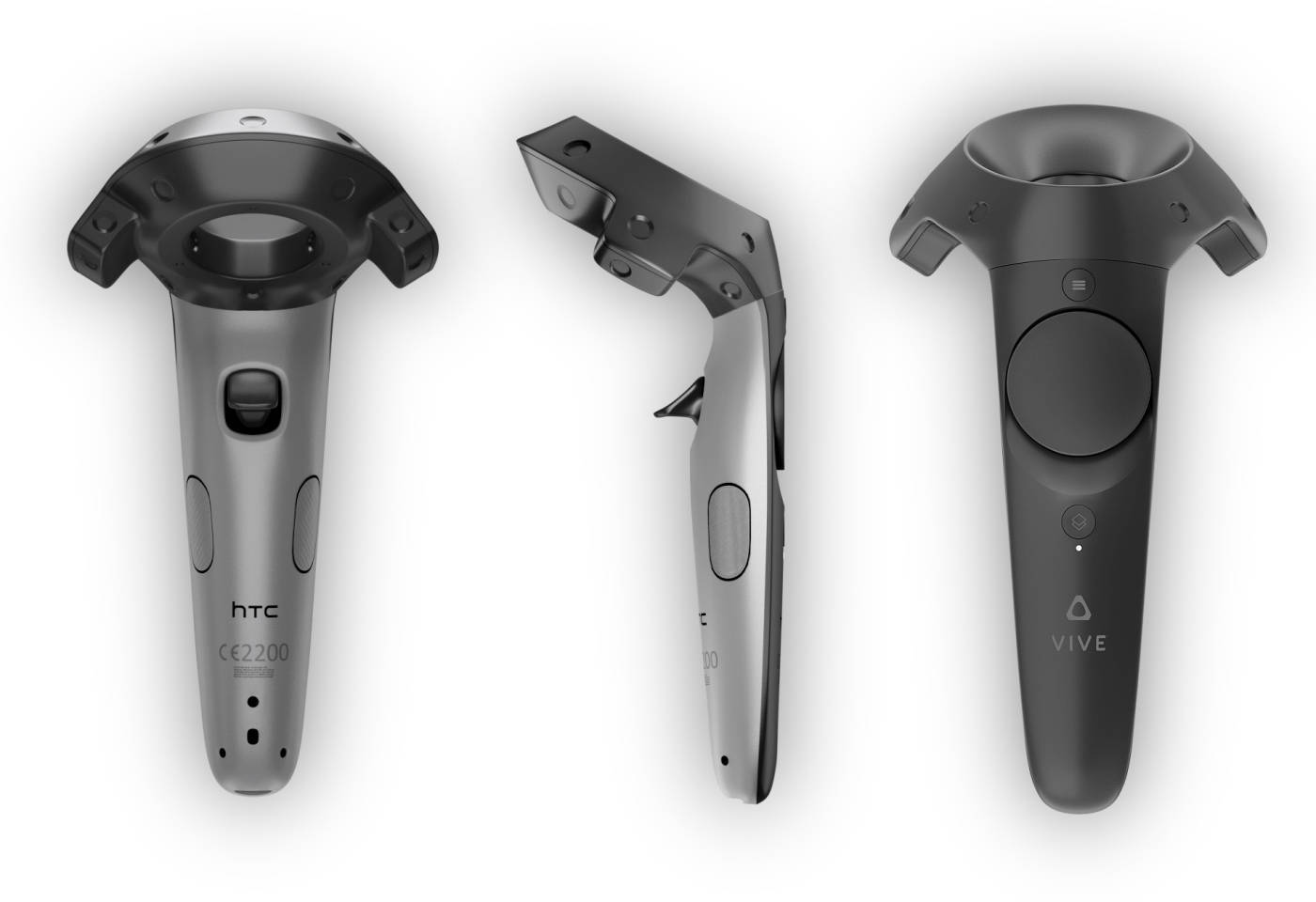 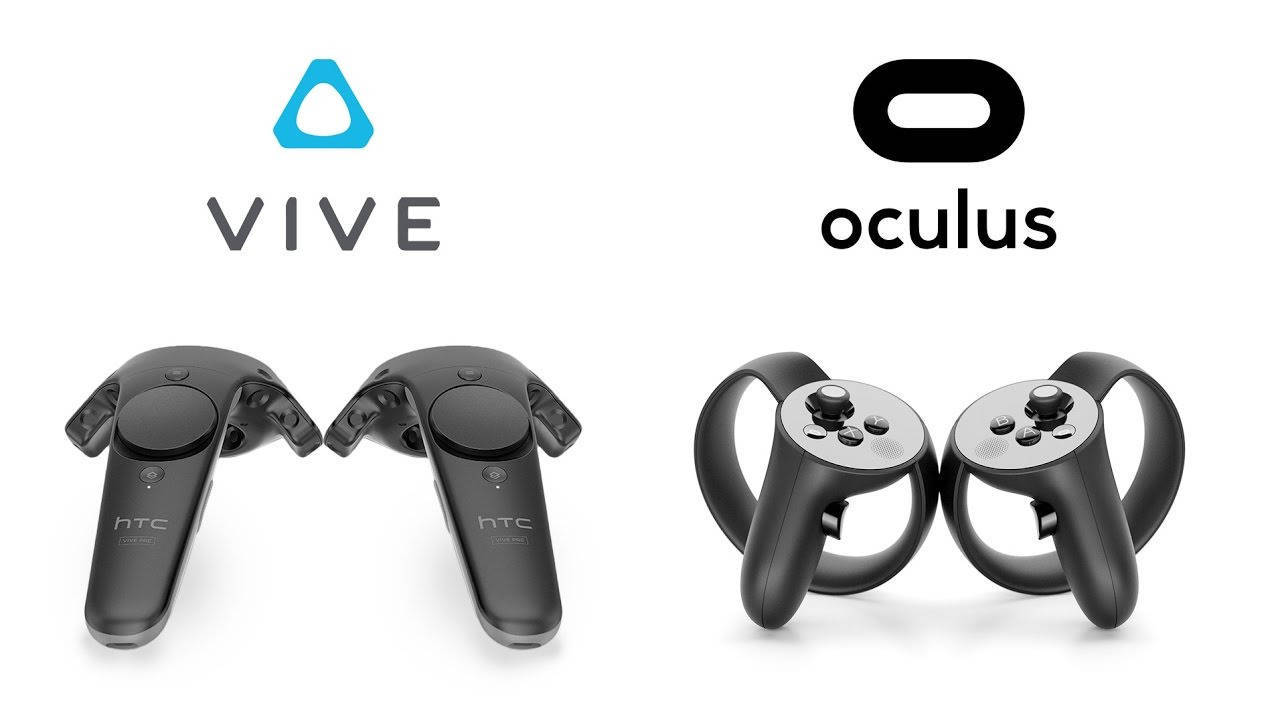 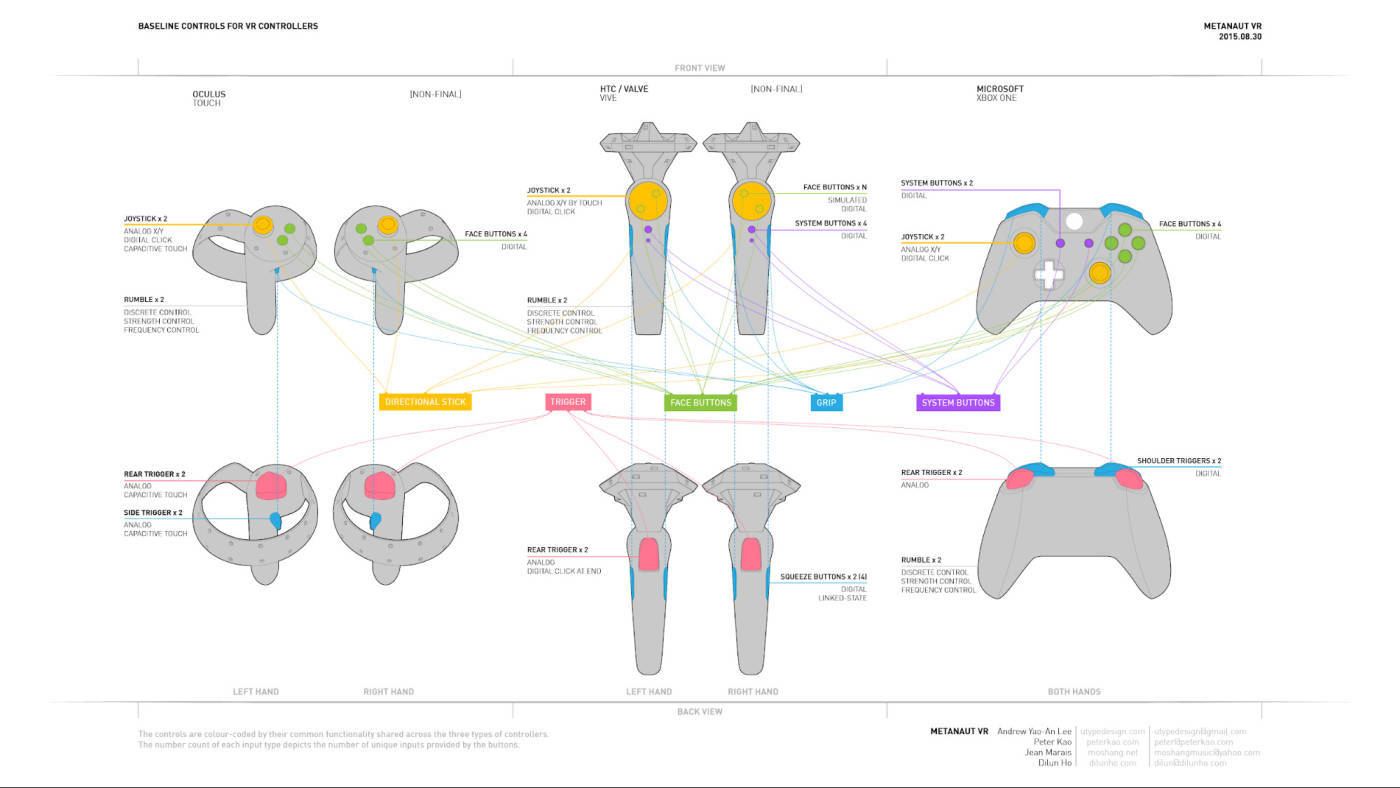 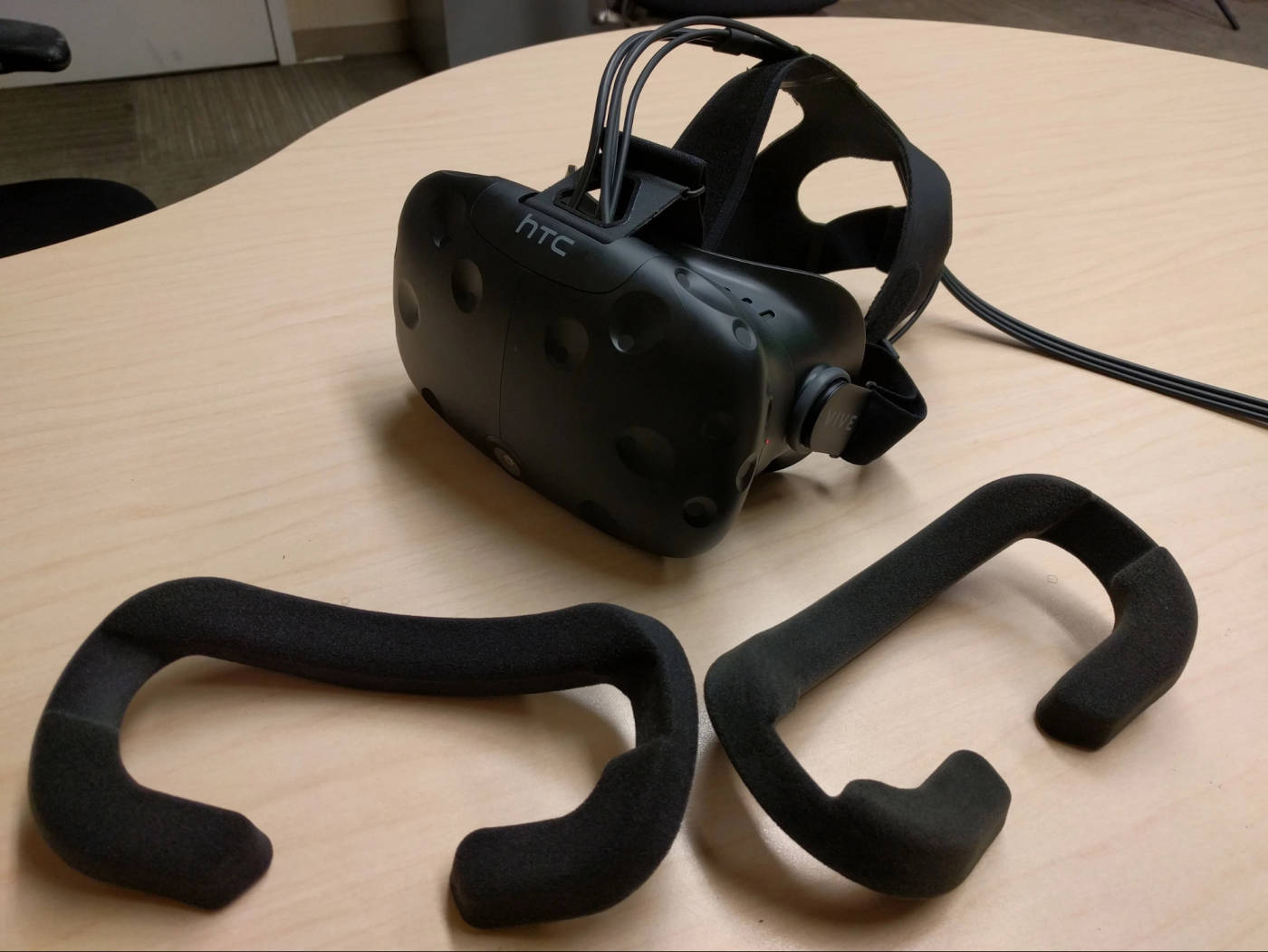 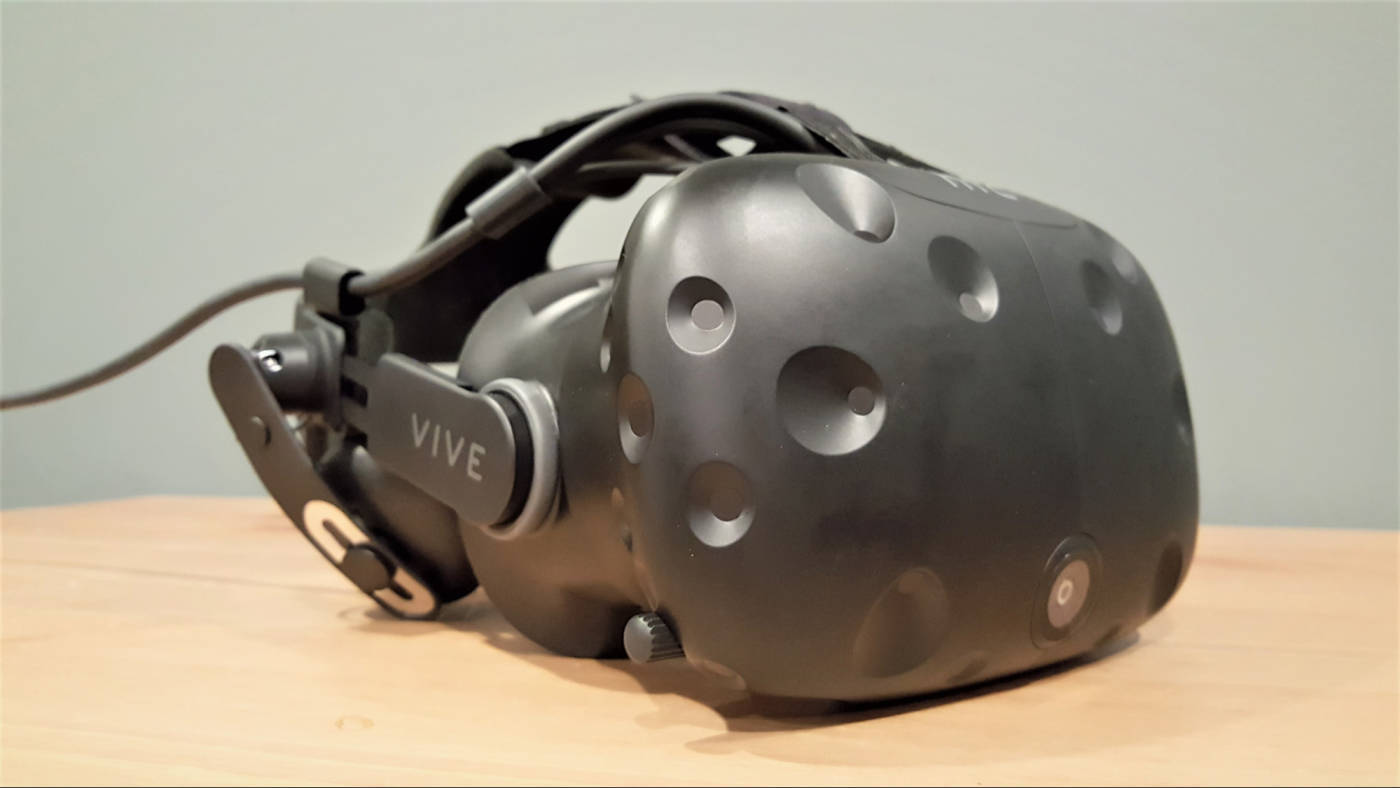 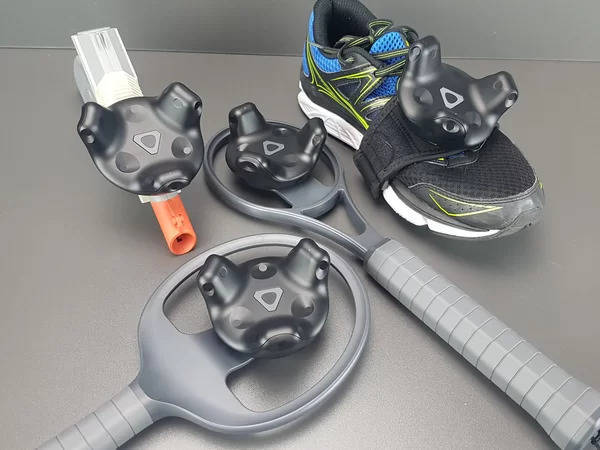 HTC Vive is one of the most popular VR-devices in the world which provides access to a huge number of games via the SteamVR platform. The virtual reality HTC glasses have one of the largest gaming space, which allows not only to change the viewing angle but also to move around in the gaming space and to track the location of the user's hands.

The first versions of the device released in April 2016 were sold at a price of 799 USD. Since then, not only many updates for the HTC Vive firmware, but also a large number of accessories designed to simplify the use of VR glasses were released:

A large area of gaming space, which allows you to play more active games with a greater degree of immersion in the virtual world;
More than 3000 games in SteamVR;
The ability to run Oculus Home games using Revive;
High accuracy of tracking due to the use of base stations;
It is possible to connect your own 3.5 headphones and to output the sound to computer speakers;
A wide choice of accessories;
Possibility of wireless connection when buying TPCast.

It is much more expensive than its equivalents: Oculus Rift, Lenovo Explorer, Samsung Odyssey;
An expensive high-performance PC is necessary for the high-quality operation of the device;
A thick wire. The wire is often found under the feet at the most inopportune moment and can press the neck as well;
Relatively heavy weight of the device and wires;
Low resolution of the screen, you can see pixels;
The necessity of mounting and presetting base stations;
The headset does not fit the head tightly with the standard strap, for its comfortable usage you will have to buy a pricey Deluxe Strap.

Design and ergonomics of HTC Vive

The glasses have a rather heavy (almost 500g) convex body made of black plastic with small dimples on the outside. There is a camera in the lower part in the middle.
At the bottom of the glasses there is a knob responsible for adjusting the optics in accordance with the interpupillary distance (IPD). Additional knobs on the sides provide an adjustment of the lens distance, which can be useful for people who wear glasses. Some users note that the device is not suitable for all types of glasses and even can scratch the lenses, so it is recommended wearing HTC Vive only with small rectangular-shaped glasses.
Additional feature is a removable soft pad for the face. As time passess, it becomes unusable and it can be replaced by a more dense, high-quality leather pad. Compared to Oculus Rift, the face does not sweat much thanks to the quality material.

Wires are another drawback of ergonomics, especially if you want to move more and actively play inside gaming space. There are two solutions to this problem: to purchase a TPCast wireless connection unit or to use the retractable cable with a ceiling mount.

Display and lens of HTC Vive

The resolution is 1200x1080 px. for each eye, by mid-2018 it significantly falls behind newer models, including HTC Vive Pro.
The viewing angle is 110 degrees, and for 2018 this is a standard indicator for similar VR devices. Taken into account that an average viewing angle of a person is 180 degrees, a viewing angle of 110 degrees does not allow to use the peripheral vision during games.
Despite the "photorealism claimed by HTC it will not be difficult for a user to distinguish between objects of virtual reality and real objects. Objects in games do not suffer from excessive pixelization, but when you try to read the text at a certain distance, it can be blurred.
With a powerful video card, you can improve the graphics performance. To do this, go to SteamVR > Settings > Developer and find the Supersampling adjustment slider, where you can increase the rendering level, which will increase the image sharpness. However, even when using the most powerful video adapters, it is not recommended setting a number higher than 2.5 — this will lead to unstable glasses work and image artifacts.

Control during games is carried out by two main buttons — a touchpad with a mechanical clicking and a trigger for the index finger. The controllers are provided with straps which can be put on hand to hold the device firmly in hand during the game, although users note that it is quite difficult to drop the devices. The controllers are heavy and it is rather difficult to forget about them during the game. There is a built-in vibration for tactile sensations in games. Due to the high quality of the assembly, the controllers can withstand even very strong hittings against the surrounding objects. Devices are connected by air with glasses, and not with a PC, so Vive Headset is a hub for all devices.

Two Vive Base Stations can be placed either on the wall or at high cabinets or shelves. The stations are almost noiseless, and the latest versions do not need to be connected with each other by wires, which advantageously distinguishes them from other devices. This system is also known as Lighthouse which uses Valve — an American partner of HTC. Its only drawback is the length of the power supply cables of the stations, although this problem can be solved with a small change or with the help of an extension cable.

Instead of mounting the base stations on the walls you can use tripods. In each station, holes with standard thread sizes are provided. The easiest way is to use tripods for lighting equipment or GorillaPod. The latter can be installed on anything, including a shelf or a central heating pipe. However, the usage of tripods reduces the size of the game room and increases the chance to touch them with controllers during games.

A distinctive feature is a remote connection to the glasses themselves. Stations only need to be connected to outlets through a power supply unit. The Micro-USB connector is used to update the firmware of the base stations, although this can also be done via Bluetooth.

A useful feature that many users like is the backlighting of contours of real-world objects called Chaperone (users sometimes call it tron mode). When approaching a real object in the room, a user will see a blue outline which will allow him to stop on time. Nevertheless, in very mobile games, a user may not have time to react when the grid appears and can damage the controller or surrounding interior items. 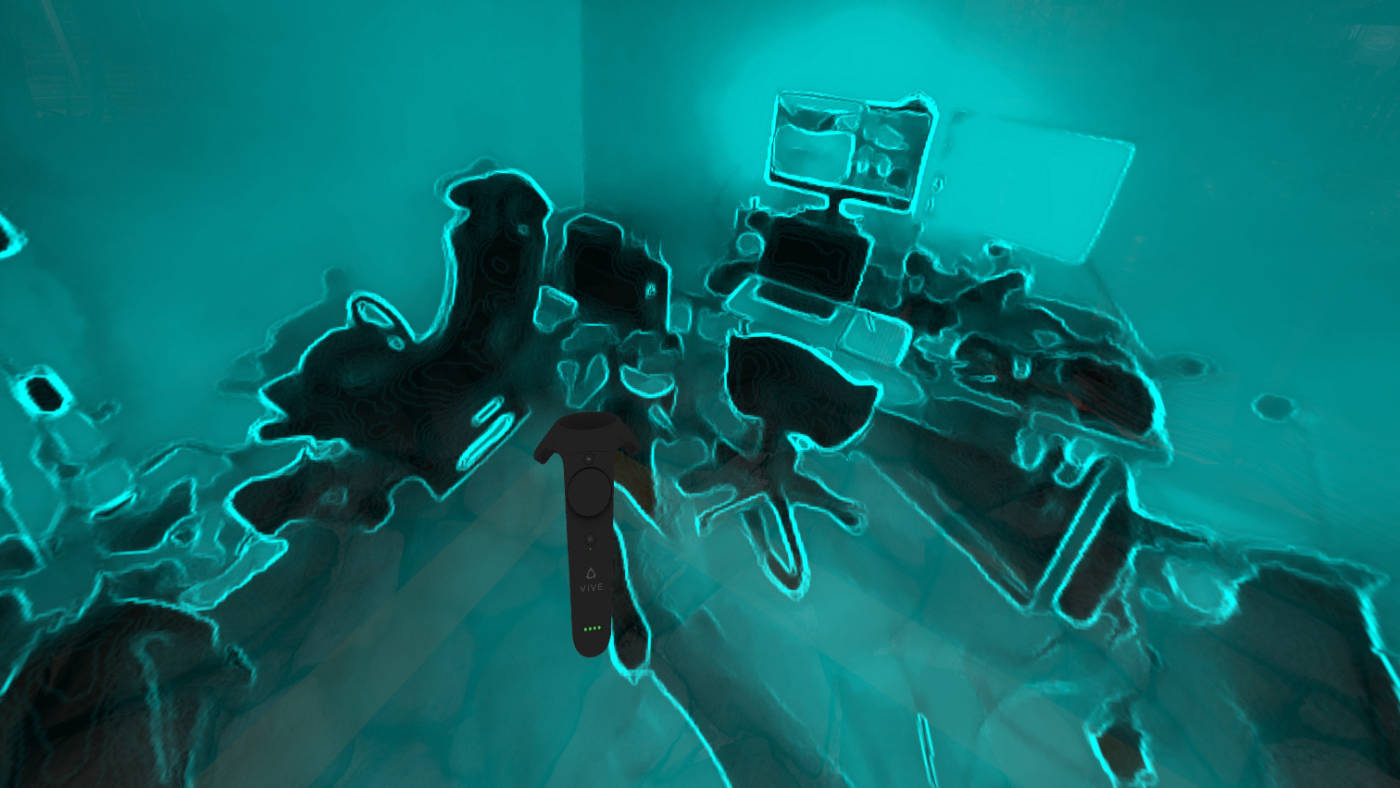 To use the device, a user will need to install

HTC Vive is able to display SteamVR notifications directly during the game, which makes the glasses not only suitable for games, but also a tool for interacting with friends during games. These glasses are also equipped with the function of game broadcasting. The process of switching between different games at SteamVR takes no more than a couple of seconds — you just need to press the System button and to choose the name of another game.


Packing and arrangement of HTC Vive


The device is packed in a large box of black color with blue stripes. The basic equipment kit includes the following items: 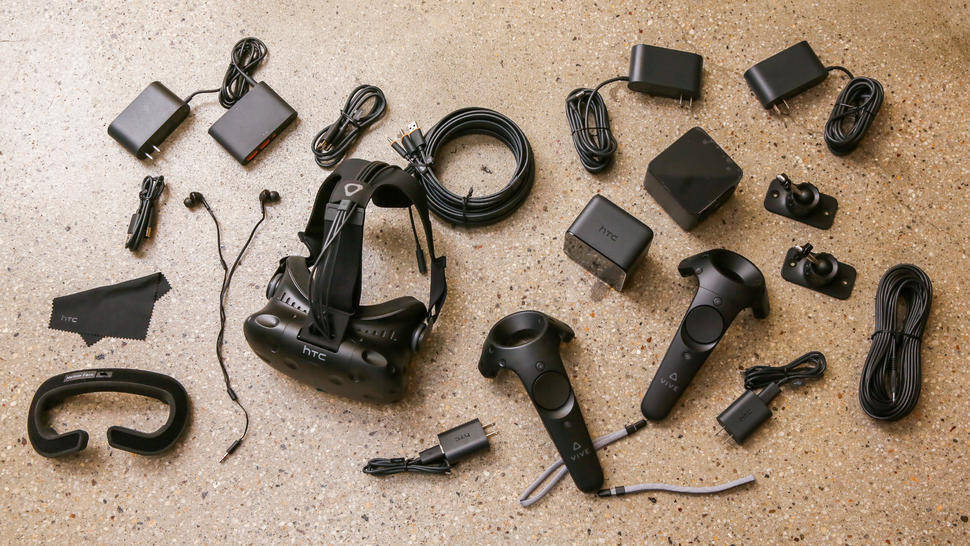 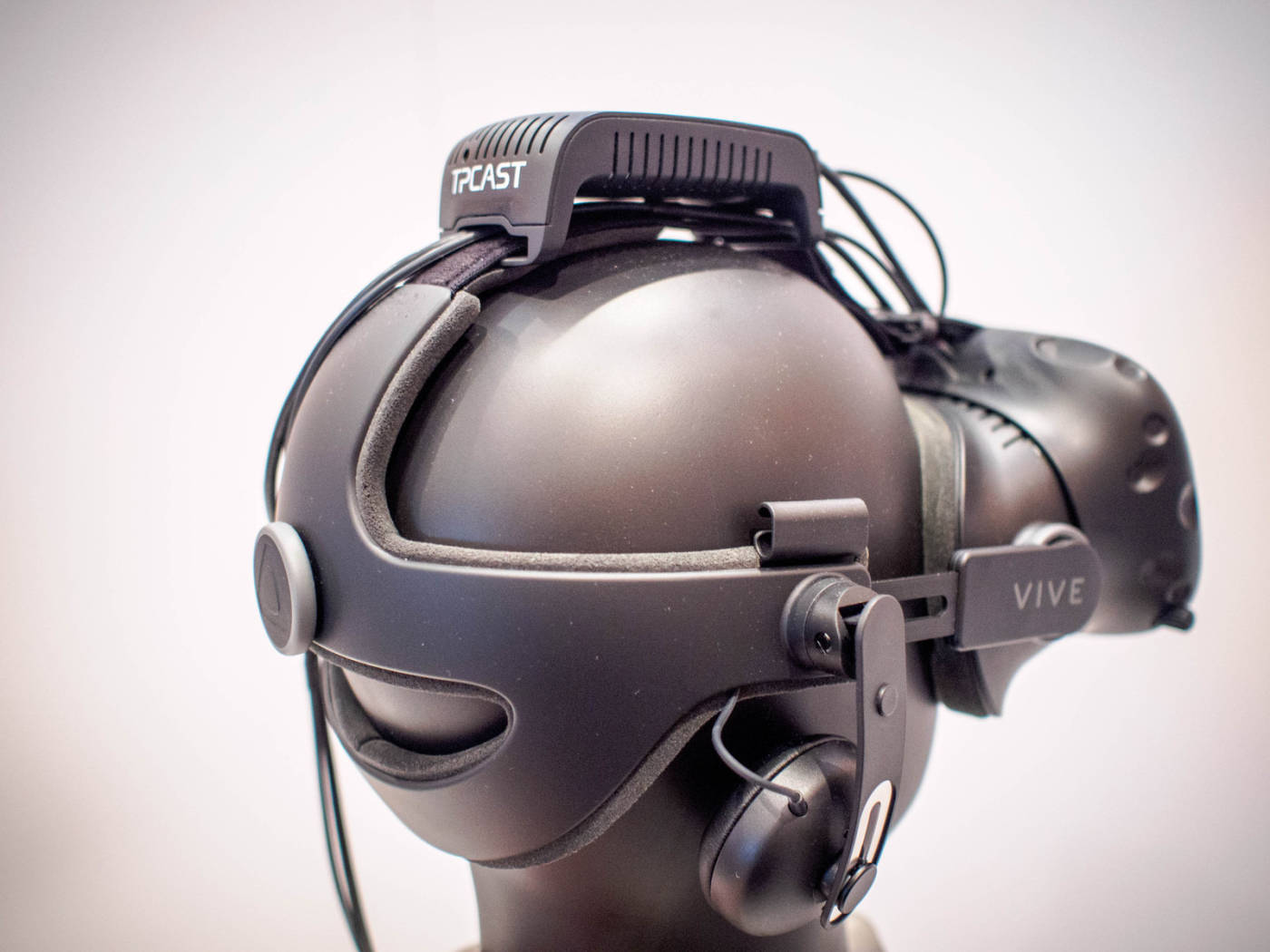 Setup and settings of HTC Vive 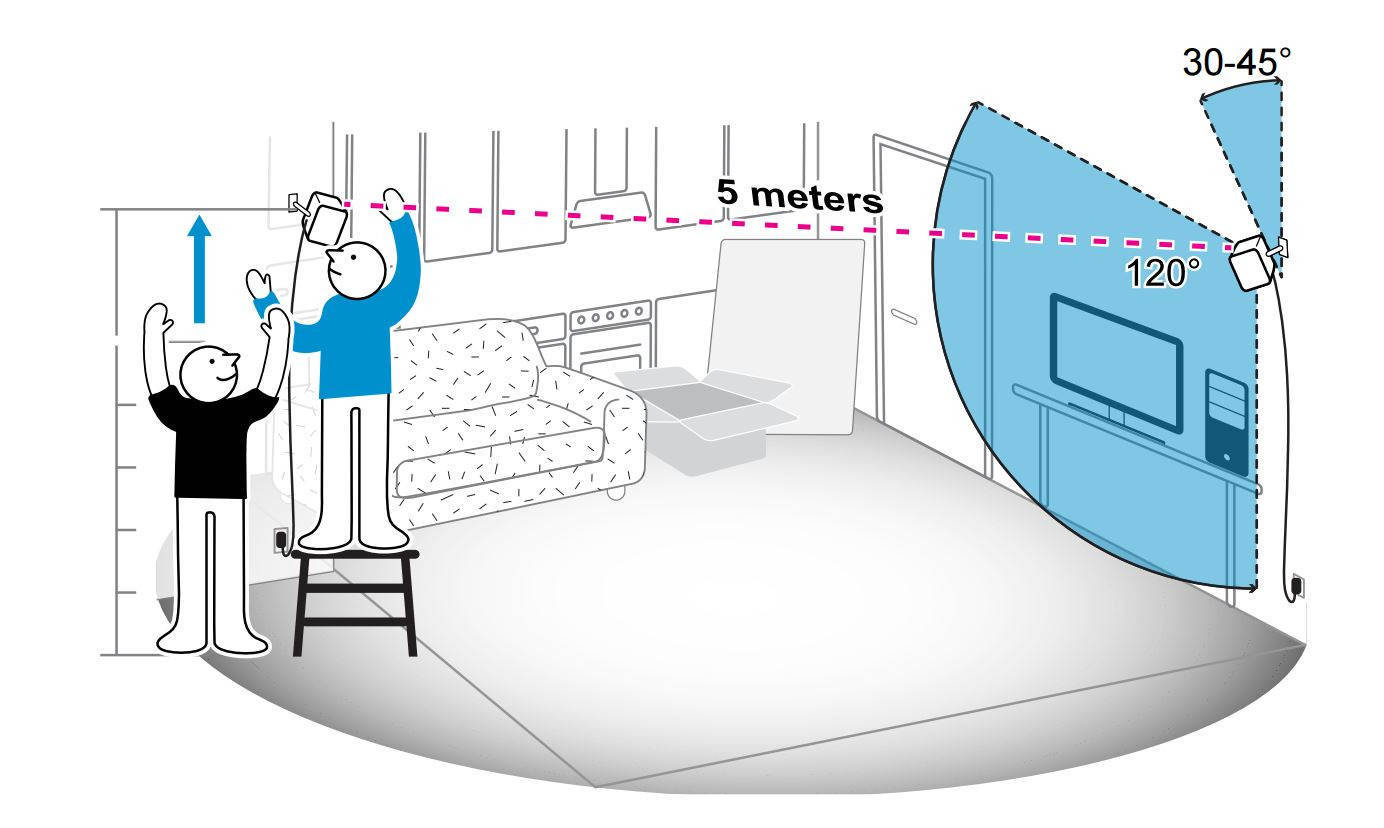 The device installation assistance program is provided with clear illustrations and it describes this process step by step.
Incorrectly configured equipment can cause not only dissonance, but even a feeling of nausea.


Errors and bugs of HTC Vive

The first use may cause dizziness and nausea, but as a rule it can happen only if you play action games or games with bright graphics. On the controllers, some directions on the trackpad stop working, which can make its usage in some games more complicated.
Users note that you can easily ‘get lost’ in the device for 2–3 hours. There are no serious health problems, but after a long game it will take some time to return to the real world. This is mainly due to the high quality of the virtual reality, good detailing of objects and really good movement monitoring.

The game in the glasses does not cause any particular inconvenience and the narrowing of the viewing angle is practically not noticeable. As for the rest things, everything is similar to the real world — the worse the user's vision is, the worse he/she will see objects. If an object in the virtual world is located in the distance, then a gamer with myopia will experience difficulties with its recognition.
It is also worth mentioning well-balanced sound and its high quality. The quality is noticeable both in the Deluxe Strap headphones and in good earplugs.
If you want to use HTC Vive in full, then to buy only glasses will not be enough. In addition, you will have to spend several hundred dollars on buying a powerful video card and a processor, to allocate a separate rather large area just for gaming space. Of course, you do not have to have free 15 square meters, but in this case the main advantage of HTC's glasses is lost — games with full immersion in virtual reality.