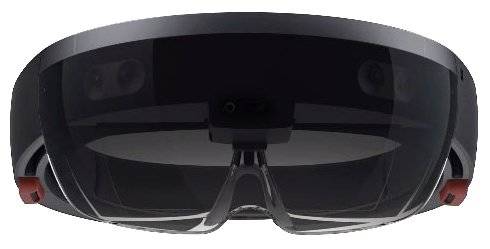 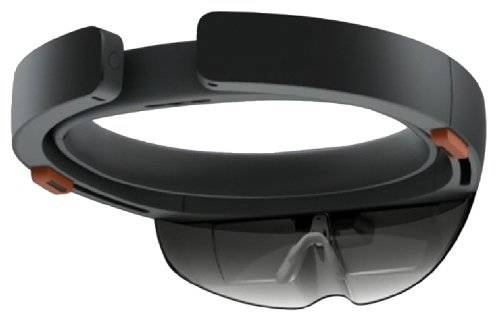 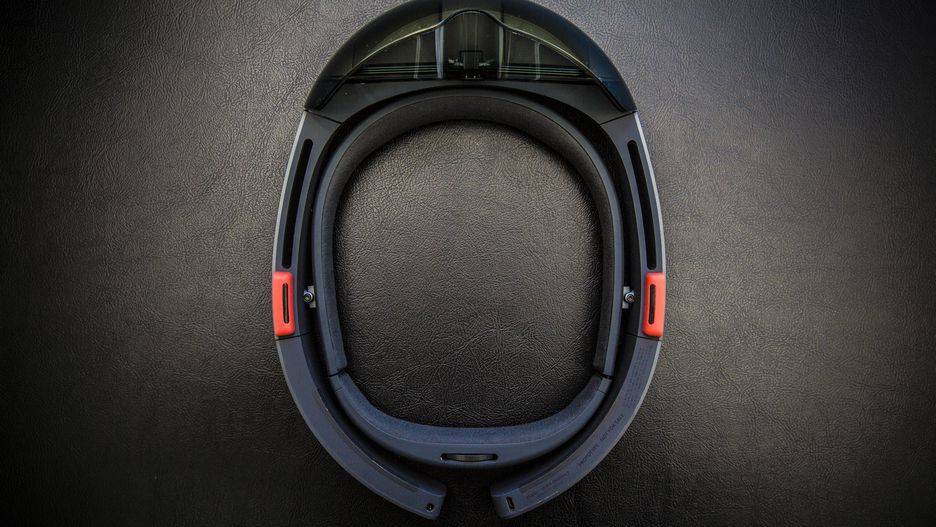 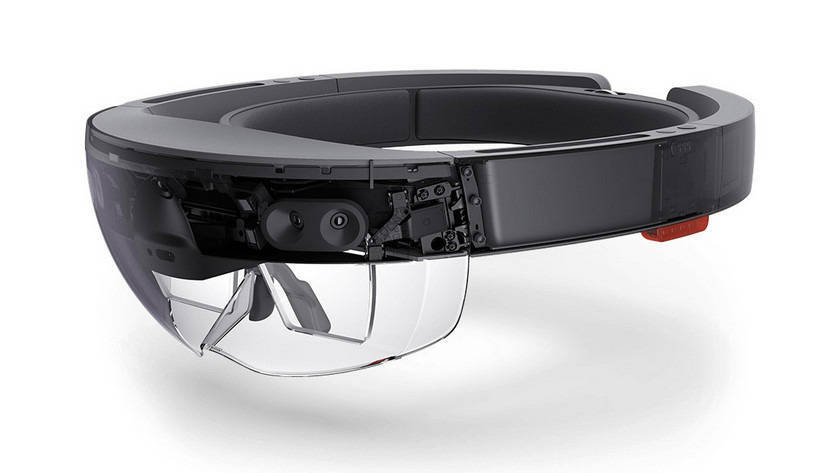 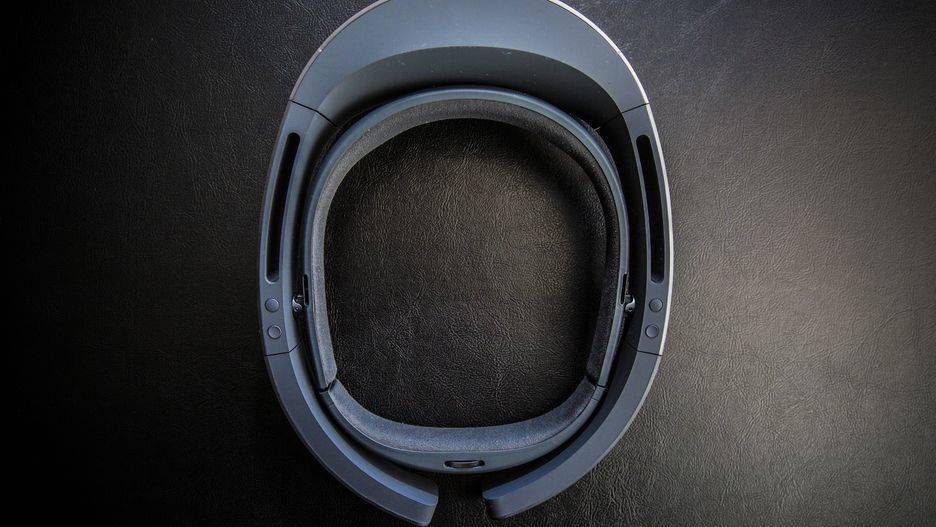 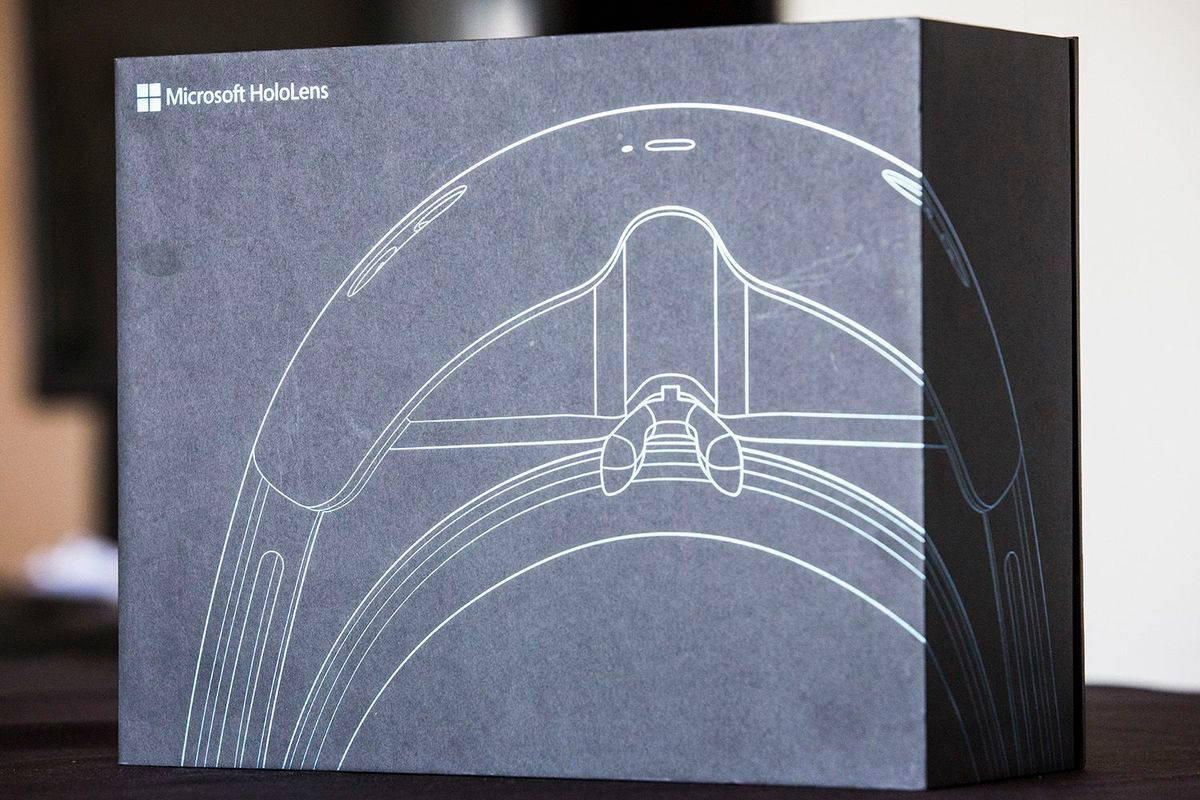 Microsoft HoloLens are glasses of mixed reality based on the built-in processor and the Windows Mixed Reality system with open source. It is a fully wireless stand-alone device that allows you to work with 3D holograms attached to real objects. Microsoft regards HoloLens as a product for companies — scientific, architectural, medical, engineering — and developers, but not for ordinary users. Officially, it is not available everywhere, you can purchase it somewhere only from resellers. Let's deal with the features of the gadget.
Microsoft HoloLens

The development of MIcrosoft Hololens began in 2012, but the team of engineers in many ways was borrowed from another project — Kinect, a game controller for Xbox released two years earlier. The first version of the glasses was presented in January 2015. In March 2016, Microsoft sent working samples to customers from the USA and Canada, and in October of the same year the company expanded its presence to Australia, Ireland, France, Germany, New Zealand and the UK. Now the gadget is sold in 39 countries. The company also leases Hololens out. Only two versions with identical hardware are available, but they have different software:

Useful technology. Mixed reality looks unfinished, but has great potential. HoloLens will be especially useful for doctors, builders, engineers, scientists.
Wireless system. It is a completely stand-alone device, i.e. it works without the computer. It does not have any wires, controllers are connected via Bluetooth. It is convenient both for work and leisure activities.
Quality voluminous sound. Thanks to the two dynamics and software optimization, glasses understand where the virtual sound should come from and add it correctly to the reality.
There is no feeling of nausea. Unlike VR helmets, glasses impose holograms on the real world, so the brain is not lost and does not believe that there is any threat for the organism.

Limited power. Because of a rather compact design and the lack of a cooling system, the hardware is not as productive as it wanted to be. This limits both the set of functions and the picture quality.
Narrow viewing angle. It concerns both vision and sensors. So, it is possible to work with holograms only in the central area, and the periphery does not participate in it. You you can get used to it, like a ski mask or swimming glasses.
Little content. There are only 424 software products in the Microsoft store, and most of them are demo versions. There are very few really useful free applications, and commercial ones cost hundreds of dollars.
Elitism. Officially, the gadget is available for commercial companies and developers at a price of at least 3,000 USD. The version for ordinary users must be available at the end of 2018.

There are very few mixed-reality gadgets on the market, and there are no options for ordinary customers at all. We will not compare HoloLens with virtual reality headsets because this is a completely different segment. Therefore, there are two competitors, the first one is not stand-alone, and the second one does not have a release model:
The Google Glass project should be mentioned separately. Its consumer version was stopped to be produced in 2015, but the option for developers continued to be released in 2017. These are slightly different glasses too because they represent an augmented reality, not a mixed one. This gadget does not attach holograms to the real world, unlike the direct competitors of Microsoft HoloLens.
On the whole, before the real release of Magic Leap One, Meta 2 remains to be the most affordable glasses with the set of functions close to HoloLens. The Microsoft product is more suitable for commercial and educational companies.

The glasses are like a bulky protective mask with a thick rim and a wide visor in their shape and size. They are smaller in size than the VR from Oculus and HTC, but compared to the elegant Google Glass — it is a real monster. The case is made of plastic and consists of two frames. The inner one is suitable for fixing on the head, the outer one is for adjusting the distance from the face. The front panel is a transparent mask made of strong glass behind which are the main lenses. Over the eyes and in the center of the visor are cameras to create a three-dimensional model of the environment.

As for the structural and control elements, the situation is as follows: 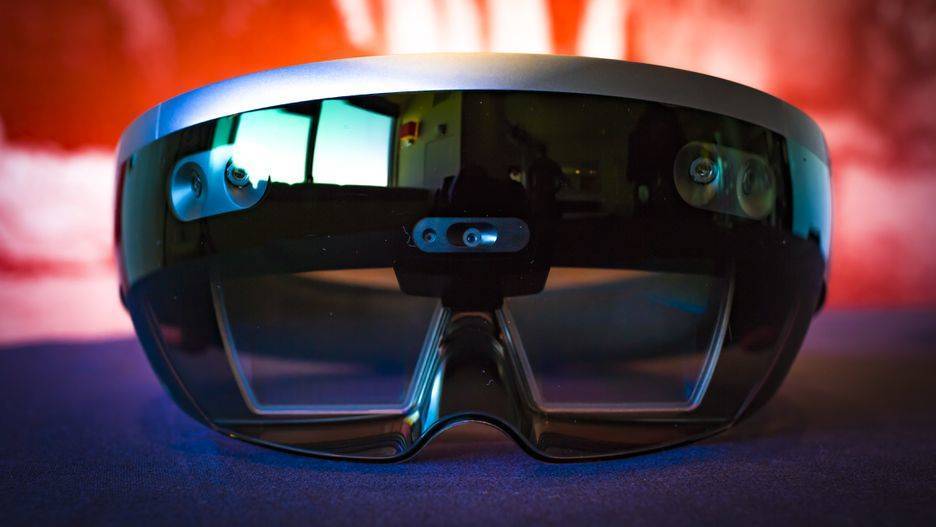 If you know how to wear virtual reality headsets, then the use of Microsoft HoloLens will not cause any problems. Thanks to two frames, the gadget is fixed firmly on the head, you can adjust the coverage and distance from your eyes. The weight of 580 grams is perceptible and is placed more forward, closer to the visor. Therefore, you cannot work too long wearing glasses. A big advantage is the lack of wires. You get used to it after less than half an hour. For a mass-market version a smaller weight and more stylish design would be more appropriate, but beauty is not really so important for performance.

Unlike virtual headsets, HoloLens uses a transparent visor on the basis of guided-wave optics and two projectors with LQoD displays, HD resolution and 16:9 aspect ratio that are located on the frame over the bridge of the nose. The combiner deals with processing and connects the real world with the virtual one.
The principle of operation is quite simple — prismatic lenses simultaneously let light from the real world (so a user sees real objects) and light from the projectors (so holograms appear). The system works thanks to the total internal reflection, which allows the lenses to pass the light through or to detain it.

Microsoft engineers have done a good job. The fact is that if the diffraction gratings are not correctly installed, holograms will float in the real world and will not be attached to objects, and this will cause severe nausea. But HoloLens does not have such an effect. At the same time, the complexity of the system is several times bigger than in VR headsets.

As for the shortcomings of the glasses, a small viewing angle — only 35 degrees which is clearly not enough for full-fledged work should be mentioned. In addition, holograms are projected only in the center of the lenses, so peripheral vision is not involved here. You get used to it after some time and it becomes convenient to work. 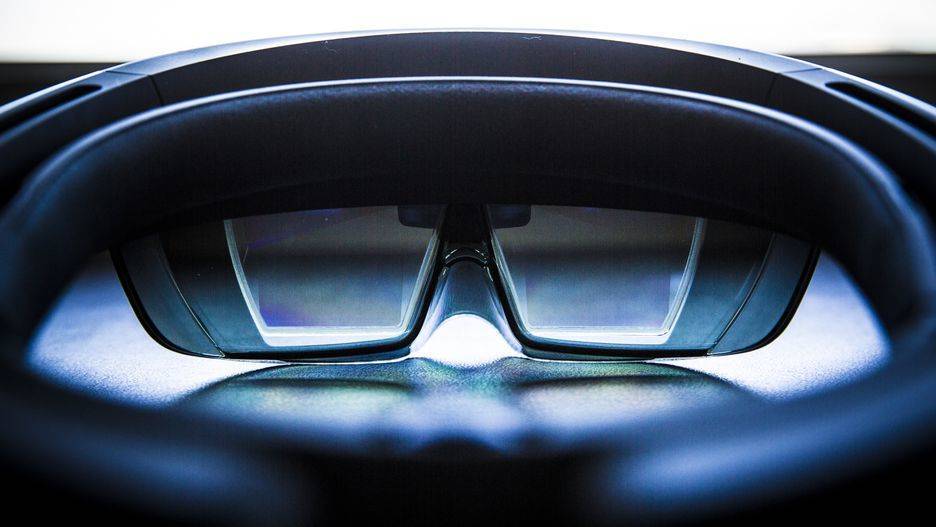 The native controller is included in the kit and it is somewhat similar to a garage door remote control unit in its design. The device is attached to the finger by an elastic loop, connects via Bluetooth and is charged from the grid via micro-USB. The gadget is simple, it has only one button. It was developed so that users’ hands do not get tired from making gestures. The clicker can be directed to virtual objects and users can interact with them: push buttons, turn on / off, scroll, drag, delete. In fact, it is just a virtual mouse. But it's convenient. 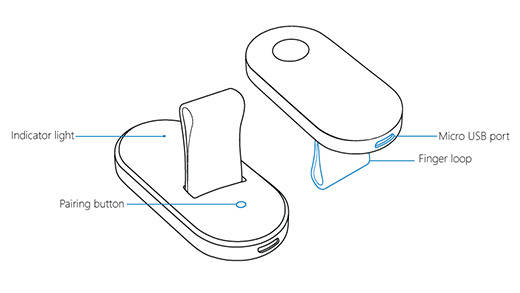 But the main pride and craftsmanship of developers demonstrates HPU, a holographic processor which is responsible for virtual objects processing. It has 24 cores! The processor runs at the speed of more than trillion operations with pixel per second, which is 200 times more than the standard software processing.

The design of glasses does not make it possible to install very powerful hardware in them also because there is no place for coolers. Now HoloLens is cooled passively, i.e. simply by ambient air. If you install a powerful processor, the system will overheat quickly.

Setting up and the beginning of work with Microsoft HoloLens

To enable the glasses, you need to fix them on your head with two frames. It is desirable to ask someone to help you for the first time. After turning on, you need to log into Microsoft Account and to calibrate the system. It takes a few minutes. You get used to the ergonomics and viewing angle after half an hour, not more. To understand how to deal with the device control a clever Microsoft assistant named Cortana helps you. There are four control options:

We'll talk a little more about gestures. The main problem is the limited viewing angle and the cameras operation which means that you have to hold your hands almost perfectly smoothly in front of the visor. There are only two basic hand gestures:

It is a little more convenient to work with the controller, although in terms of its set of functions it is a complete analogue of Air Tap.

Software and games for Microsoft HoloLens

The basic control is carried out through the start menu, all the basic applications are already installed into the device's memory. The menu looks like a standard Windows 10 interface with tiles. There are still very few programs optimized for HoloLens, they are not similar to demo versions which show the potential of the system. But through the glasses you can run UWP — standard applications and games with Windows 10. You can work with them through the clicker and virtual keyboard, but you can always connect physical controllers via Bluetooth, including gamepads.

The official website has 424 applications, most of them are free demo versions. Among applications interesting and useful for ordinary users we can highlight the following ones:
However, since Microsoft HoloLens is a product for large commercial companies, both the set of functions and the software are oriented towards them. For example, the store has Open-pit mining (OAR) application for training workers in the mining and metallurgical sector and quarry mining. It is convenient and useful, but the only problem is that the program costs 500 USD. Developers plan to continue creating exclusive programs for customers, for example, for NASA, Volvo or Disney, specifically for their tasks. Therefore, mass-market applications and games should not be expected yet. 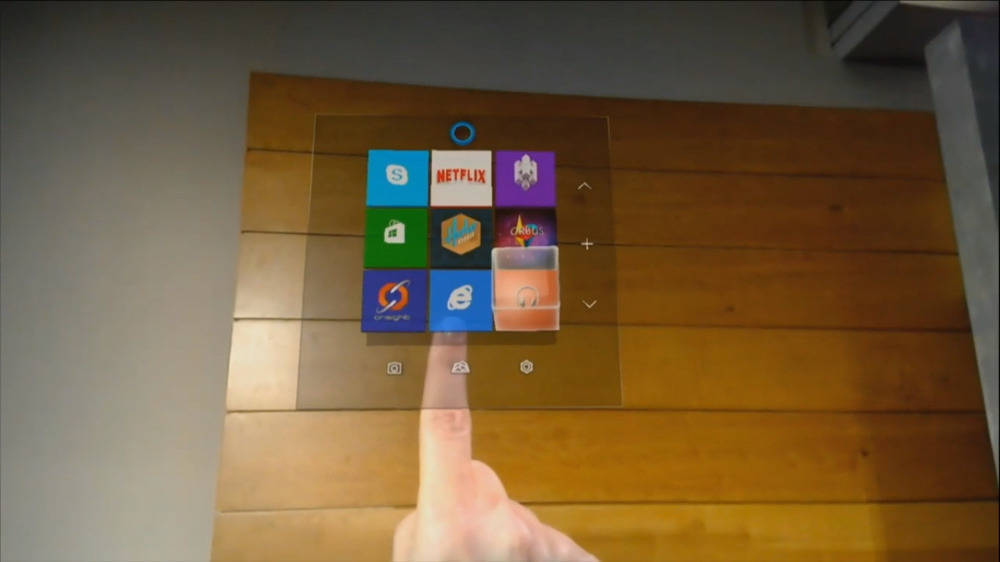 
The gadget is sold in a beautiful and expensive looking box. There are two smaller boxes inside with cases on zippies. In the set we find:
As a result, the system works out of the box, you do not need to buy anything in addition, and even the computer will not be needed. Taken into account the specifics and narrow focus, at the minimum price of 3,000 USD more interesting accessories, for example, controllers or cameras would be desired to see. 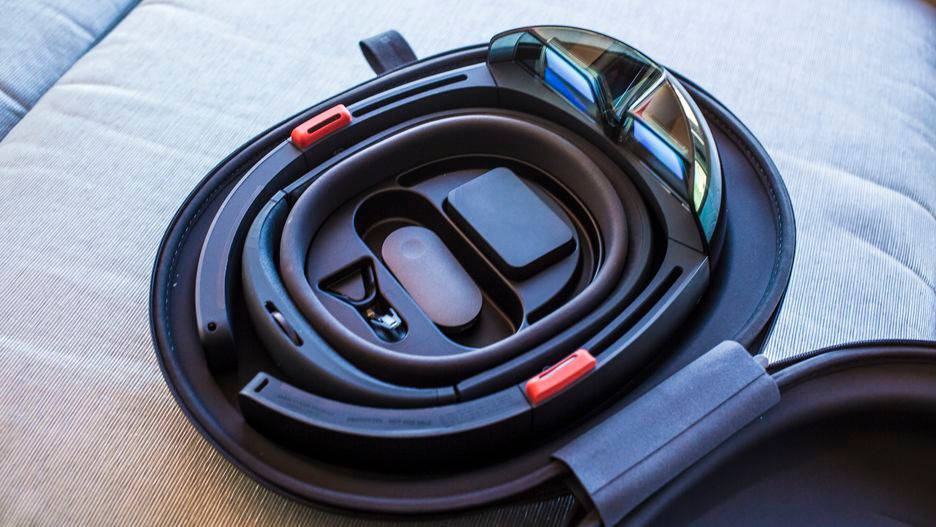 Problems with the device and recommendations for using Microsoft HoloLens


Since ordinary users rarely buy the gadget, information about possible problems comes from the manufacturer, and only a few experts and journalists from the conferences share with their real experience of its usage. Among the frequent errors that users may come across the following ones can be mentioned:

If you still want to buy Microsoft HoloLens, you should know that the gadget supports only English and is not officially available in some countries. Therefore, any hardware or software problems will have to be solved by yourself or you will have to find gadget-savvy acquaintances — the device will not be accepted at the Microsoft service center.

You can read guides, instructions, usage tips and problem solving recommendations on the official Microsoft HoloLens support website (in English).